What every female athlete needs to know about ACL injuries

This winter, a friend asked me about the high incidence of ACL tears among the men and women’s basketball teams and I had a very quick answer. There was really no surprise that workouts consisting of bench press, “abs”, and the occasional half-sie squat did not help to prevent ACL tears among the players. However what is interesting is that ACL injuries are more common in female athletes, who are up to eight times more likely to injure their ACL than male athletes. Even more concerning is that as many as 70% of those ACL injuries involve little to no contact from an opposing player. One reason women are at greater risk for ACL injuries is that they tend to have weaker posterior chains (hamstrings and glutes) than men. To help prevent ACL injuries among female athletes, teams must employ strength programs that emphasize strength in the posterior chain and improved motor control.

The hamstrings and glutes are vital when it comes to stabilizing the knee. Playing a sport such as basketball, soccer or volleyball at a high level without effectively training the hamstrings or glutes would be like dressing in all black and crawling across the freeway at night – risky at best. Weak hamstrings/glutes are problematic when an imbalance with the quadriceps is created. The hamstrings connect directly to the back of the lower leg bone – the tibia – and enact a posterior translation (think backwards pull) on the bone. The gluteus maximus also plays a role in stabilizing the knee because most of the glute max connects with the IT band (iliotibial tract) along the side of the leg. As the glute max contracts it will pull on the IT band, which will then also cause a “backwards pull” on the tibia. This counteracts the forward pull on the tibia that the quad imposes. An imbalance between the quad and hamstring causes the quad to pull the tibia too far forward and places increased stress on the ACL. In other words, if you are quadzilla and have monster quads but no hamstring strength your chance of an ACL tear is increased dramatically as the tibia is pulled too far forward under the femur. 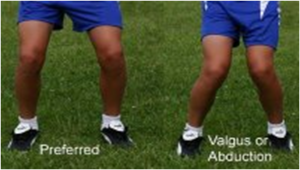 athletes contact the ground and place a valgus stress on their knees when their knees cave inward. The inward motion of the knee will place greater stress on the ACL as less torque is applied through the joint to stabilize it. To move on the field with more stable knees, an athlete must learn to land with the knee tracking outward toward the pinky toe of the same foot. Start with teaching the athlete how to land and jump on one leg forward and laterally through an agility ladder. This can later be progressed to single leg depth drops off of a bench or box. The emphasis must be on sticking the landing in a stable position with the toes straight and knee tracking outward. This progression will teach an athlete how to land and run/jump with the knee tracking out and transforms an athlete from a ticking time bomb destined for an orthopedic surgeon into a functional physical specimen.

While injuries are inevitable in sports, the risk can be greatly reduced through proper training. Each year thousands of female athletes are seeing their sport’s seasons derailed by ACL tears. The risk of a non-contact tear can be reduced greatly simply by training smart in the weight room. So, the next time you see one of your friends on the girls soccer/basketball team bench press for the third day in a row, make her do some glute ham raises and hip bridges – she’ll thank you later.